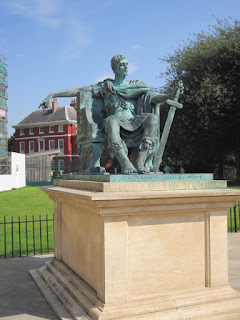 It is Jaz from October Farm that got me thinking, in one of her recent posts, that I should start thinking about and preparing myself for Easter. I know, it is early and Lent has not even started, but it will come soon enough and preparing for Easter will make me cope with the grey weeks and days ahead. Some of this preparation will be reading about Roman history and watching I, Claudius, which I bought on DVDs recenly, because I associate Easter with Rome. Easter time is when movies about the birth of Christianity are shown on TB, but also a good deal of peplums set in the Roman Empire. It is a reason like another to rediscover this great British series. I might also buy and read the original novel, or at least put it on my reading list, as I have been wanting to read it for a while.

And this picture was taken in front of York Minster. It is a statue of Constantine the Great, the first Christian emperor. He was proclaimed emperor in York and I thought it fitted the topic of this blog post. And it is an excuse like another to share another picture of York.
Posted by Guillaume at 15:57

well, today it feels more like july here. sunny and 70 and i am miserable! where is my winter?