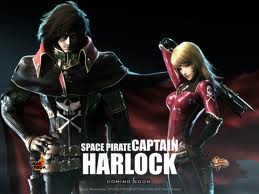 This will not come as new for my French speaking readers, but I am a big fan of Captain Harlock, which I discovered as a (very young) child growing up in Québec. He was called Capitaine Albator in the French speaking world, because for some reason Captain Harlock was deemed sounding to close to Captain Haddock. I am most familiar with the 1978 TV series, where he used to fight the Mazones. I also watched as a young adult Arcadia of my Youth, which I thought was beautiful. I discovered on Facebook from a friend (the father of my godson) that a new movie featuring Harlock will be released this year. I don't know how easy it will be to find it, but I am eager to watch it, although of course I am anxious it lives up to my childhood expectations. I have uploaded here the teaser. There is nothing overtly original in it, but I wonder if you can see people from my generation find the character so appealing.